Reducing pre-hydration in a VRM 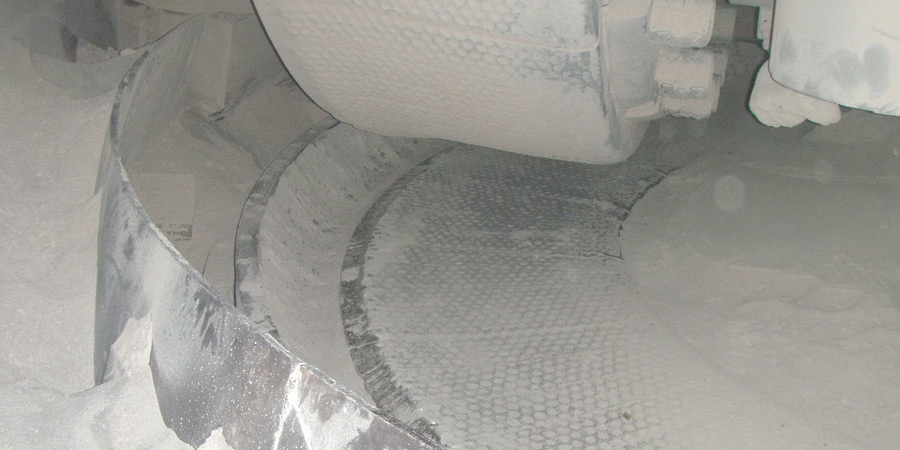 However, cement produced in VRMs sometimes has lower strength and longer setting time compared to ball-mill cements made with the same raw materials. In most cases, pre-hydration of the cement, due to the presence of moisture inside the VRM, is a significant factor. Water is sprayed onto the grinding bed in the VRM to stabilize the layer of material that passes under the rollers and reduce vibration. The amount of water required can be reduced significantly by using appropriate grinding aids that stabilize the grinding bed without causing pre-hydration.

Grinding of cement in a VRM can be 30-40% more efficient than in a ball mill and reducing the level of pre-hydration during VRM operation can potentially improve cement performance. Pre-hydration has a negative effect on cement properties, including:

Although water is sprayed on material as it as ground in both VRMs and ball mills, VRM operation usually leads to higher cement pre-hydration levels. GCP recently conducted a survey of 181 different cements produced in ball mills and VRM’s and found 48% of the VRM-produced cements had a problematic level of pre-hydration, compared to only 19% of ball mill-produced cement.

Pre-hydration differs from normal hydration in that the water is usually present as a vapor that adsorbs onto the cement surface. In this case, only the soluble phases (free lime, alkali sulfate phases, and aluminate phases) dissolve and react. Due to the limited availability of water, pre-hydration products tend to form as a compact layer around the cement particles and limit the further dissolution of the cement particles, delaying setting and strength development.

The presence of this pre-hydration layer can also interfere with the mechanism of chemical additives and hinder their effectiveness. That's why it can be difficult to mitigate pre-hydration effects by using accelerators or traditional quality-improving grinding aids.

Typically, plants have responded to pre-hydration issues by grinding the cement to a higher fineness. However, this reduces throughput and increases energy consumption as well as water demand for the finished cement.
There are two approaches to reducing prehydration in a VRM:

Typically both approaches should be used to achieve the best results.