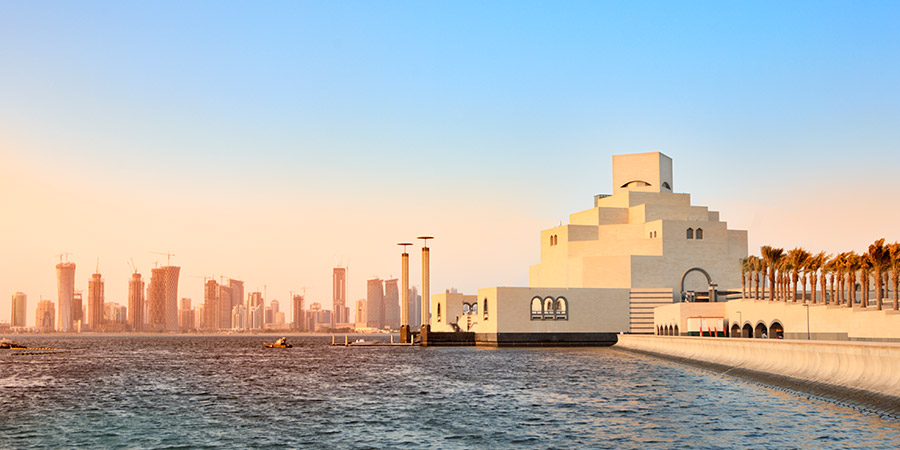 Poised at the end of Doha Bay, the Museum of Islamic Art rises from the waters of the Arabian Gulf. The climate and corrosive salt environment of the Persian Gulf created a number of challenges for this striking new building. Developed on reclaimed land, the museum’s foundation rests below the water table, subjecting foundations to highly aggressive chloride and sulfate conditions that can quickly deteriorate the concrete and significantly reduce the life of the structure.

The museum was not the only structure to need protection against harsh elements.

The transportation infrastructure faced a daunting series of issues, including:

Bill Parks, project manager for waterproofer F.D. Thomas, knew if they could clear one crucial hurdle—changing the original waterproofing specs of the transportation infrastructure—he and his team could meet the demanding expectations. “We insisted on using the PREPRUFE® SCS system,” Parks recalls. “If we had used the other system, it would have been a disaster.”

The PREPRUFE® SCS pre-applied system is engineered for shotcrete linings. The easy-to-apply membrane and injected grout created a uniform and continuous waterproofing system, sealing off the structure with a resilient cover and ending lateral water migration. While up to two years of work remains on tunnel boring and finishing, the south portal transportation infrastructure results are outstanding. F.D. Thomas has installed the PREPRUFE® SCS system to keep the tunnel dry.

The museum’s coastal proximity meant a comprehensive waterproofing system was needed to protect the slab from water ingress, provide protection from salt and sulfates in the ground, and preserve the lifespan of the structure. Faced with salt water exposure, high water tables, and fluctuating temperatures, of PREPRUFE® waterproofing membrane proved to be the ideal solution to provide watertight protection from below the ground up.

PREPRUFE® is an advanced membrane system that protects substructures from the harmful effects of water, vapor and gas. The membrane’s synthetic adhesive layers aggressively adhere to concrete, forming a unique intimate seal that prevents any water migration between the waterproofing and the structure, substantially reducing the risk of leaks. In addition, the BITUTHUNE® LM asphalt-modified liquid membrane was installed to provide a continuous waterproofing barrier system between the concrete slab and diaphragm walls – meeting the museum construction project’s comprehensive waterproofing needs.